For the following stories, go to MENU/RECENT EVENTS

From the very dry and beautiful grounds of St. Edward State Park, snuggled up against the fantastically restored Lodge at St. Edward, the Pacific Northwest British Car Clubs held a revival of sorts – The 2021 Western Washington All British Field Meet. In a post Covid-19 environment, car shows have been few and far between, so it was great to be at a show again.

Oregon Minis join in for some Peninsula Mini fun

The Peninsula Mini Society hosted their annual event which was highlighted by a Vashon Island tour and a LaMay Museum visit. An impressive number of Oregon Minis made the trip north and joined in two days of Mini merriment.

It had been a year and a half since SAMOA members met in person. Kept apart by the dreaded pandemic we could wait no longer and met on July 17, 2021 at Steve and Kim Gay’s house near Cottage Lake east of Woodinville. Shall we say it was an unqualified success? 31 members plus one guest gathered amongst 26 Minis and a beautiful MG1100 for an afternoon of catching up on Mini affairs and a heaping helping of picnic fun at the annual Picnic on The Green.

Minis in the Car Corral, Minis on the track and plenty of other vintage racing excitement made for a great day at Pacific Raceways.

Don and Marian are quite the adventurers in ‘Old Paint’ and they set a new standard on their anniversary trip to the Edgefield McMenamins.  How many Mini owners do you know who have crossed the Columbia River going backwards in their Mini?

The wee town of Olga has a wonderful wreck of a store, soon to be a United States Post Office and grocery/cafe if the friends of olgastore.org have their way. The old place looks like a Mini repair facility to me, but then what doesn’t?

It has been a struggle. The Covid-19 pandemic brought SAMOA to a screeching halt in 2020 and 2021 looks like more of the same. We hope you understand. For details on the pandemic and how SAMOA is effected here in the state of Washington, go to MENU/NEXT EVENTS.

Enter your Mini in any of these other summer events

For details go to NEXT EVENTS and 2021 EVENTS CALENDAR

Sept 18, Sat, 11:30AM – SAMOA BASH ON VASHON. Traditional classic Mini tour beginning with pastries and coffee at The Roasterie compliments of your favorite Mini club, and ending with lunch at The Vashon Brewery (just a coincidence). More details in NEXT EVENTS or contact – Peter Larsen

Greenwood Car Show lives on as a monthly cruise

Famous for a city block-full of classic Minis at each years Greenwood Car Show, perhaps SAMOA should organize a platoon of Minis for CRUISE GREENWOOD. https://www.greenwoodcarshow.com

WE’RE UP AND RUNNIN’, MEMBERSHIP WISE

In these trying times keep in mind there’s no better mood enhancer than a drive in your Mini. Next time you hit the road, snap a selfie, writeup a brief description of your trip and send it to the blog editor so your fellow SAMOAns get to share in your experience.

Why the big smile?

Why indeed! It’s Barbara Praefke’s first time behind the wheel of her newly recommissioned Riley Elf MkI. The beautiful and oh so original Mini was brought back to life by Kelley Mascher after Barbara purchased it from Chuck Heleker.

This was Barbara’s first drive in the Elf and the first time it’s been on the road in about 20 years.

The Mk I Elf was produced from October 1961 through October 1962. Only about 3000 were manufactured. This car was built in October 1962. Mrs. Greenhill purchased the car new on the south coast of England in January, 1963. The color scheme, Chartreuse Yellow and Florentine Blue, is the original paint. The car has 30,000 original miles.

In the UK, after Mrs. Greenhill, the Elf was owned for a short time by Keith Redwood and then by Roy Laycock. Both are well known in the UK Mini community. Chuck Heleker imported the car in 1997 and sold it to Barbara.

It’s an atypical tour when the Mini driver doesn’t come along but James Thompson drove up with his trailer and picked up Barth Sherwood’s Mini, along with it’s jazzy new motor (fresh from Autosport) and left Barth behind on the trip back to James’ south-sound shop, A-Series NW, where James will bring them together again.

In 1963, Graham Thomas Powlesland of Devon was the first owner of Barth’s Mini hence the name, Graham, and James of course lives south of Puyallup in the town of Graham in case you were wondering.  –Barth Sherwood photo

Another drive, well planned by Jim Younkins, this time through Thurston, Mason and Grays Harbor counties.  Great weather & roads, ending with good food at The Ranch House BBQ near Olympia.  Started with  nine classic Minis and ended with nine classic Minis! (Editorial comment;  If the car is well maintained,  there is no reason not to trust it.  Drive the damn thing!)  Stopped at the ‘Satsop Business Park’ for a stretch and photo opportunity.  (The old guys in the group were thankful for a chance to irrigate the local flora).  Peter, Ben, Carl and I extended the drive through Shelton and Allyn on Hwy 302 on the way home.  Long day but I would welcome the chance to do it again tomorrow.  Sorry if you were unable to come along, you missed a good one. -Jerry Miller, May 22,2021

It’s what you do when you grow up in Ballard – way back when we were driving our 50s-vintage Chevrolets. Now we still meet up at Dick’s Drive-In but we’re driving our Minis instead. A few weeks ago we “Met half way,” Bill Wecker driving his MkI Cooper S up from Ballard and me down from Everett in the Rover Cooper to the Edmonds Dick’s Drive-In next to Winco on Hwy 99. We had to wait a few days for the rain to stop but the social distancing was no problem nor was the transfer of funds now that Dick’s has card readers. -Ed Sauer

I went for a ride today and ended up in Redondo Beach, home of the 1962 Seattle World’s Fair’s Bubbleator. If you zoom into the Bubbleator, you might be able to discern the turkey the owners have put in there for seasonal decor, which I thought was pretty funny.

It was really great seeing everyone at the October meeting! Yep, the request was made for Mini photos, so I figured it would be put on the blog.

Grumbleina is my Mini, named for the canned grumbling sound she makes at idle, like it is an affront to her very core that she is not in motion. My neighbor’s kid thinks my name is Minnie. He’s almost 4, so I’m wondering if he’ll find out first about Santa or that my name is Lara. I answer to Minnie, to him. -Lara Williamson

We have also entered into discussions with the Lodge at St. Edwards about blocking rooms for the event along with other potential services. More on this and other services will be forthcoming once the food manager comes on staff next month.  Regardless, wouldn’t it be fun to have a room onsite at the WWABFM where you could enjoy a beverage in the pub Friday night, and walk to the event Saturday morning from your room!   In the meantime, please save August 21, 2021 on your calendar and update your email and mailing information under the “About Us” tab on the wwabfm.com website as we will be using emails to provide timely information as it develops given the uniqueness of the times.    You can use this direct link to update your information on the WWABFM website.  http://wwabfm.com/mailing-list/

Knowing that personal information security is paramount, please be assured that we don’t share the information with anyone.   Thanks so much for your assistance.

The joint Victoria and Vancouver Mini Meet West 2021 team has been monitoring the Vaccinations & Canada/USA Border opening to non-essential travel, as well as the restrictions on public gatherings and event sizes, and the vaccination rollouts.

Consequently, the Victoria and Vancouver Mini Meet 2021 team has made the hard decision to cancel MMW2021 for Victoria BC, as we do not feel that we will be in a position to hold the event, given the increases we are seeing in cases and variants and the slow process of vaccinations, and USA/Canada border closures.  We do not make this decision lightly, but we realize that protecting the health of our Mini friends and their families, as well as our sponsors and partners is a higher priority than holding the meet.

In BC, current vaccination plans have been moving out the dates and we will not see the majority of the province vaccinated until late in the year.  There is no target date from the Health Authorities on when we may increase numbers for events.  Currently we are not allowed any large events, especially one that would have 250 people and the general public attending.

The MMW 2021 team will be closing the registration page and issuing refunds to the attendees. The fees paid will be returned as paid in Canadian currency, (minus the PayPal fees, which PayPal keeps) through PayPal in the next few weeks.  Please note that with currency fluctuations of the Canadian Dollar, the US$ refund amount may vary slightly from when you registered.  It will take some time to process all refunds, so please be patient.

The block booking for the host hotel is cancelled and all reservations within the block will be cancelled at the same time, attendees do not need to call in.  However, if you had made extended reservations or other reservations for accommodation or ferry reservations, you will have to cancel these yourself.

The Vancouver Mini Club and the Victoria Minis Car Club hope to host a MMW in the future, so you can come and enjoy what BC has to offer.  Thank you to everyone for your support and for your understanding.  Any questions please email Mike at MMW2021.vic@gmail.com

Thank you to our Sponsors – Seven Mini Parts and Cedar Valley Alignment – for the support of MMW2021.  Please continue to support our Sponsors as they help keep your car running or complete your rebuild for next year’s MMW.

Go to RECENT EVENTS in the MENU at top of home page for details of the following and many other past events.

Almost too much excitement for one event.  Details and photos from the January 25, 2020 SAMOA White Elephant Auction and slot car races are posted now in RECENT EVENTS.

Go to MENU/HISTORY for details on the following plus many more historical club stories.

Hard to do anything these days so let’s go back for some more good stuff from yesteryear.

Some fascinating stuff about the earliest days of SAMOA from one of the earliest of SAMOA members.  Would you believe member #4?!

Never too early to start…

Folks in the front and the kids in the back of their Mini Estate.  They’re still involved in SAMOA and one of those kids is VP.

A light in a dark room

SAMOA photos from 1986 found on the dark room floor.  Well, not really, but found they were and now we get to see them again.

Questions arise about a proper boot lid and insulation as Ted Atkins restores a Cooper S. 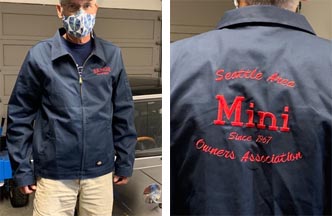 SAMOA members can now custom order an official SAMOA jacket of their very own!  Go up to the menu and click on REGALIA for all the exciting details.

You’ll be saying, “Thank goodness for SAMOA,” the first time you are working on your Mini and you need “that special tool.”  You know the one, and chances are it’s in the SAMOA Tool Library.

A jumper cable walks into a bar. The bartender says, “I’ll serve you, but don’t start anything.”